The Bruise Storytelling and Poetry Show This Sunday!

Posted on January 8, 2018 by kelleybrannonprojects

This Sunday, January 14th get ready to laugh, cry, or puke (depending on how hungover you are) as Carrie Wurst, Josh Boyd, Christian Roberts, Deesha Thosar, and Annie Aeodice take the stage with comedy, storytelling and poetry with special musical guest Honey Chrome! 8pm and Free as always!! Only at Idlewild: 24 St. Nicholas Ave, Brooklyn. Hosted by the dysfunctional yet totally competent but recently text-fired Kelley Brannon 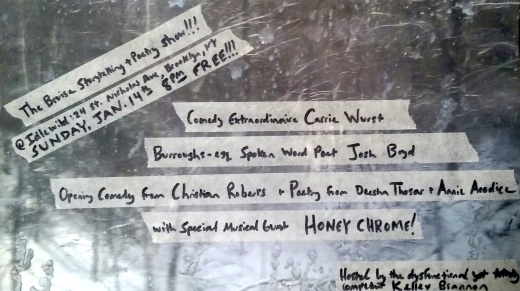